The Euro. How a Common Currency Threatens the Future of Europe 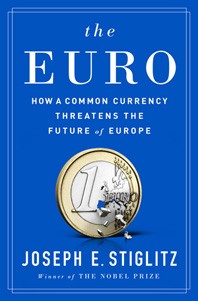 The latest book by Joseph Stiglitz is a good indicator of where economists are in their understanding of the euro area crisis.  The starting point is to show “how even well-intentioned efforts at economic integration can backfire when questionable economic doctrines, shaped more by ideology and interests than by evidence and economic science, drive the agenda.” (p.xvi) The questionable doctrines are those of neoliberalism, upheld by Germany because it serves the interests of that country best. Obviously, Stiglitz thinks that this ideology should be abandoned and Germany should give up its resistance to a range of reforms aimed at “creating a Eurozone that works” (ch.9). But the politics of self-serving ideologies does not give us any clue about what could make Germany agree to such reforms.

The book contains all the plausible answers to the puzzle of how the fiscal problems of a small peripheral economy, Greece, could trigger such a deep and protracted crisis in a union of advanced economies. The first policy reactions focused on the fiscal problems, which led to tightened EU fiscal surveillance and an intergovernmental Fiscal Compact. Most academics were never convinced by the fiscal story, but pointed to the competitiveness problems of peripheral economies, out-competed by their Northern neighbors. Others focused more on the financial amplification of (originally private) debt problems, particularly negative feedback loops between bank and government balance sheets that then spread to other segments of the financial system. Stiglitz subscribes to both views.

As the crisis lingered on, advocates of both the “real” and the financial interpretations looked more and more for inherent mechanisms in the euro area’s policy architecture that have made recovery so difficult. Stiglitz summarizes the emerging consensus nicely: “The key reforms that are needed are in the structure of the currency union itself, not in the economies of the individual countries.” (p.xii)  Even if the harsh medicine worked, a prudently living patient Greece would still be prone to crises that are contagious. “Ever-foolish capital markets” (p.125) will always take excessive risks, be it in financing asset bubbles or permanent current account imbalances. Once the bubble bursts, the effects may become uncontrollable, hitting the usual and some unusual suspects alike, dragging the integrated union with its inadequate safety nets into the maelstrom. The conclusion from this systemic diagnosis could not be more clearly formulated: “...without a minimal degree of risk-sharing, no monetary union can possibly function.” (p.xx)

But the insights of the preface are not followed up until chapter 9. In the meantime, a different set of economic ideas is advanced. In place of a theory about finance and insurance, the “real” economics of the theory of optimum currency areas takes pride of place. Stiglitz criticises the Europeans for not having listened to economists, or at least not the right ones. But listening to Stiglitz would not help a European policy-maker, as his own account is internally inconsistent. He relies on the consensus among economists which insists that an exchange rate would allow Greece and the other peripheral economies to adjust much more easily (p.100, ch.10), whereas the pre-euro experience was that liberalized capital flows and active financial markets rendered exchange rates a source of instability rather than adjustment. He endorses the “consensus among economists that for the single currency to work, what was required is that there be sufficient similarity among the countries” (p.15), whereas his own endorsement of risk-sharing entails that it is preferable that members of a risk pool are diverse so that they are not all equally affected by the common shock which hit the North-Atlantic economy in 2007-08. Optimum currency area theory makes the crisis and its resolution precisely a matter of adjustment by individual countries, whereas Stiglitz had told us that the crisis stems from a monetary system with specific defects.

These theoretical inconsistencies make for poorly conceived policy prescriptions. Stiglitz is aware that leaving the euro would not really help Greece, because the burden of its euro-denominated debt would increase when its own currency devalues. But there is an answer: Stiglitz proposes an “amicable divorce” whereby an exiting Greece would pay back its debts in its own (new) currency and be forgiven some of its debt (p.291). Why this might be agreed amicably by the creditors, Stiglitz does not explain. He assumes away the problems that a country must encounter upon exit.

Neglecting the implications of his own argument that risk-sharing is needed, Stiglitz fails to notice that considerable risk-sharing already occurs, holding the euro area together. Before the crisis, the common currency had reduced liquidity risks of assets across the board, which brought down risk premia and thus facilitated investment.  During the crisis, extraordinary monetary policy measures provided funds to all banks; this measure became most valuable to peripheral banks when no other bank and not even domestic savers wanted to lend to them as time went on. A cross-border payments system (TARGET) mitigated the effects of a sudden stop of capital flows on trade finance.

Six structural reforms for “more Europe” can be seen as following up on the risk-sharing idea although the term is not used to justify them as a package (chapter 9). The most important is a banking union with a joint deposit insurance fund (p.241). Some of Stiglitz’s proposals, such as amending the parameters of “fiscal discipline by focusing on a structural deficit” (p.245), were implemented long before the book went to press. Cyclically adjusted measurement of deficits was one of the first reforms to the Stability and Growth Pact (SGP) adopted in the early 2000s. A “small and medium enterprise lending facility” (p.246) has been in place since mid-2015 and is on target to mobilize €318 bn by mid-2018.

This is not to criticize an economist, who is not an EU specialist after all, for having missed all the wonderful reforms that are paving the way to “ever closer union”. But it is deplorable that all he and other economists have to offer is indignation about the “muddling through” of politicians. It is easy to draw up six-point plans. But careful policy analysis and a deeper understanding of the politics would be politically and economically more helpful. Policy analysis can show that, in practice, European policymakers have tacitly acknowledged the shifting consensus of economists. Most noticeably, they have not implemented counterproductive fiscal constraints through the SGP, and they have built a banking union as well as a “firewall” against the negative feedback loop in the guise of the European Stability Mechanism. These are not minor institutional innovations and they had to be agreed under the most adverse circumstances.

Admittedly, these reforms are not as comprehensive as a social planner would like them to be. Stiglitz, like so many others, heavily criticizes European governments for their dithering. But governments are caught between imperatives of domestic democracy and imperatives of crisis containment, and they have few instruments available. Stiglitz is vehement in demanding both more democratic legitimation for EU crisis management and more robust and expansive joint safety nets. Governments from the main guarantor countries, such as Germany and the Netherlands, feel that they cannot do both at the same time: right-wing Eurosceptic parties snap at their heels while instability and low growth call for joint action. Muddling through should be taken seriously as a process of dealing with this dilemma and not too quickly condemned as evidence of failure. Joe Stiglitz has greatly contributed to the analysis of imperfect markets all his life. But for the analysis of imperfect polities the reader must turn elsewhere.

Please follow the link below to a podcast of the launch of this book at LSE:  http://www.lse.ac.uk/newsAndMedia/videoAndAudio/channels/publicLecturesAndEvents/player.aspx?id=3573