The New Intergovernmentalism: States and Supranational Actors in the Post-Maastricht Era 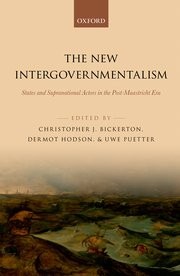 In this provocative volume, Bickerton, Hodsen and Puetter (BHP) elaborate a “new intergovernmentalism” (NI), standing simultaneously as a set of observational data, a qualitatively new era, and a congeries of theoretical ideas. The attempt to construct an NI plastic enough to serve all of these functions ends up in too much complexity and ambiguity, but it nevertheless inspires a set of excellent contributions and promises to reward further engagement within EU Studies and beyond.

BHP observes an “integration paradox”: EU member states coordinate in many new and increasingly sensitive areas, but do so without traditional Community method supranationalism. This empirical NI has been fruitful in stimulating my own thinking about European integration. But in trying to transfigure the NI into an era and a theory, to some extent they disfigure it.

As an era, the NI feels rather like the old. We must unremember European Political Cooperation (EPC), the Snake, Trevi, the European Monetary System, Schengen; unsee Justice and Home Affairs communitarization; and imagine consensus decision making as new fifty years after the Luxembourg Compromise. The editors see the NI everywhere, and end up conflating it with everything that’s not the traditional Community method. To put it in Bulmer’s words: NI “seeks to superimpose one tendency on a very internally differentiated EU reality” (p. 303). Most problematically, the institutions and practices that give the era its name are never parameterized in terms of other things happening simultaneously. Which is weightier, the spread of NI arrangements, or the post-Maastricht expansion of “Community” competence, including generalization of the Ordinary Legislative Procedure (Commission agenda power, Council QMV, EP codecision, ECJ jurisdiction)? The editors seem to be counting the number of NI bodies (which is growing) without proportioning them to the wider stock of increasingly diverse arrangements that crowd the EU’s institutional landscape.

As theory, NI advances many intriguing ideas, but becomes an unruly pastiche of Bickerton’s (2012) powerful analysis of the changing European political economy (European integration: from nation-states to member states, Oxford University Press), Puetter’s thought-provoking 2013 analysis of intergovernmental deliberation and consensus-seeking in the European Council, and Hodson’s excellent 2011 work on de novo bodies and departures from the Community method in monetary governance. Each contributes to my understanding of the contemporary EU. But too many fine details from each project are elevated into core theoretical claims of the collaborative compound. I would have preferred to see Bickerton’s theory taken as central, with very judicious treatment of claims derived from the Council and monetary governance, mostly as empirical terrain on which the NI plays out.

Too many parts move around the theoretical NI, at considerable inferential cost. Concepts are often wooly and many key ones –e.g., intergovernmentalism and supranationalism-- go undefined. Variables rarely find operationalization, contributing to

Several hypotheses compete against straw people. For instance, Hypothesis 4, that domestic politics have become “standalone inputs” into integration, starts inscrutable and ends as baroque product differentiation, Moravcsik’s producer group interests now complemented with “ruling ideologies, the nature and substance of contestation in any given period, the changing patterns of state-society relationships, and their correspondence to a set of institutional forms that may or may not derive from actually existing social and political relations”.

Behind these complexities stands an idea worth taking seriously, which inspired a splendid set of contributions from an unusually strong group of contributors. The book is long: fifteen chapters inside sections on law and politics (Bickerton on state transformation, Cardwell and Hervey on law, and Christiansen on treaties), policy (Smith on Common Security and Defence Policy, Wolff on Justice and Home Affairs, Howarth and Quaglia on financial regulation), institutions (Puetter on the Council, Peterson on the Commission, Granger on the Court, Kloka and Schmidt on interinstitutional relations, Pollak and Slominski on the European Parliament, Hodson on the European Central Bank), a critique (Bulmer) and conclusions.

Five of these --Christiansen, Peterson, Kloka and Schmidt, Pollak and Slominski, and Bulmer—figure among the most satisfying chapters this institutionalist has read this year. The first reduces out many theoretical extranea and demonstrates the importance of intertemporal spillovers in treaty change, essential groundwork for a theory of endogenous institutional change in the EU. Evidence from the Commission, Council, Parliament and Court paints a picture not only of tremendous institutional continuity in the EU, but the substantial growth not only of non-traditional forms of supranationalism (as with the ECB, on Bulmer’s read), but also of the old fashioned Community method itself. While most of this is inconsistent with NI, to inspire these terrific analyses speaks to the NI’s fruitfulness; and to host publication of disconfirming accounts speaks to the editors’ intellectual openness and integrity.

Finally, BHP deserves praise for presenting some broadly productive theoretical ideas about institutions. I have argued that the cooperation problem and the institutional status quo interact to drive institutional choice in International Relations (in Joseph Jupille, Walter Mattli and Duncan Snidal (2013), Institutional Choice and Global Commerce, Cambridge University Press). In contemporary European politics, BHP have taught me, the cooperation problem is best defined by some vector of a “good policy” logic demanding more Europe, and a “populist politics” logic demanding less. The latter, most developed by Bickerton, is especially powerful in these Trump-and-Brexit times, is indeed missing from accounts developed for the permissive consensus era (including Moravcsik’s), and promises to be crucial to understanding EU institutional choice moving forward.