In Place of Inter-State Retaliation. The European Union’s Rejection of WTO-style Trade Sanctions and Trade Remedies. 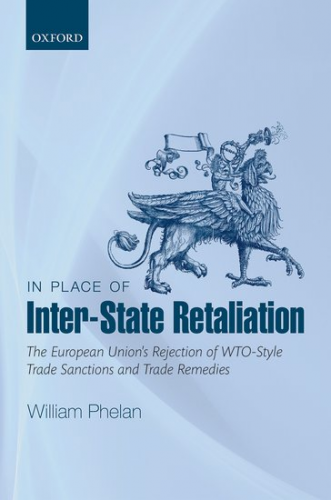 This slim book does something difficult. Like a previous and somewhat dated literature, William Phelan’s study analyzes a sui generis feature of the EU, but it studies this ‘unidentified political object’ in terms of a well-established International Relations literature on international regimes and legal interpretations on constitutionalization. The unique feature becomes apparent when we look at the EU as a trade agreement (and Phelan is fully aware that the EU is much more). The EU’s trade regime has outlawed bilateral sanctions and retaliation between its member states, as well as the most common bilateral remedies such as anti-dumping, countervailing duties and sectoral industry safeguards. Trade disputes between two member states must be settled via the Commission and the European Court of Justice. This is not only in contrast to the EU’s relationship with the world outside, notably the United States or China. It is also in contrast to all other trade agreements in the world, such as NAFTA, in which protectionist measures for the US trucking industry led Mexico to retaliatory tariffs on a wide and arbitrary range of US exports.

The puzzle that Phelan tries to solve is how the EU came to establish and maintain such a trade regime that is distinct from the GATT and the WTO. Lawyers and the Court played a key role in its establishment. Phelan argues that three inter-connected Court decisions in the early 1960s triggered what Joseph Weiler called the ‘constitutionalization’ of the European legal order that differentiated EU dispute resolution from general international law. Van Gend en Loos (Case 26/62) established that EU law has direct effect; Costa v. ENEI (Case 6/64) laid down that European law and rulings have supremacy over national legal obligations even if the latter were enacted afterwards; and, largely ignored but crucial, Commission v. Luxembourg and Belgium (Cases 90 and 91/63) outlawed ‘self-help’ measures in trade disputes with other member states. How substitution of inter-state retaliation with supranational dispute settlement by the EU emerged can be explained well by judicial politics.

Phelan addresses the inherent problem of explaining a singular feature of the EU with a comparative analysis between WTO and other trade agreements. This is extremely illuminating and shows deep knowledge that is presented with modesty and understatement. Phelan points out that, in contrast to the WTO, the EU can give private parties, and not only governments, a right to bring complaints before the body that settles trade disputes. This is because private plaintiffs cannot trigger a possible crisis of economic diplomacy with other nations in the EU. If one side of the dispute does not follow the ruling of the dispute settlement, it is for national courts to sanction non-compliance, rather than for the aggrieved state to impose trade sanctions on the deviating neighbour.

But why do member state governments comply with such strictures on their sovereignty in the long run? After all, Court rulings can be overturned or become dead letters if member states cannot live with them. Phelan is therefore right in putting more of his research effort into the maintenance of this self-contained international trade regime. His explanation mobilizes the political-economic literature for a threefold explanation of this unique achievement:

Each of these explanations is based on a coherent body of literature that takes recourse to domestic politics and political institutions rather than, to take one alternative, the threat of a big bully that is made the common enemy to be tackled with regional cooperation.

These explanations are assessed at a relatively high level of aggregation in one meaty chapter of ‘analysis’, in contrast to the subsequent ‘narrative’. There is certainly room for more in-depth testing of these hypotheses. To give just a few examples: Do all new member states in Central and Eastern Europe fulfil these conditions? If not, do governments and firms have more difficulties with the EU’s trade regime there? Is each of these three explanations necessary or can, for instance, a well-targeted welfare state substitute for a less proportional-representative electoral system? Even so, it is a strength, not a weakness, if a book stimulates further interesting questions and gives suggestive, rather than exhaustive evidence. It is enough to provide the groundwork for more detailed studies in the future, including by others.

Last but not least, Brexit has made Phelan’s book an extremely topical study of how trade disputes between members are handled, compared to other trade agreements and compared to the EU’s external trade relations. It makes us aware what the UK is about to lose if the country abandons the Single Market. As the Danish finance minister Jensen put it succinctly: ‘There are two kinds of European nations. There are small nations and there are countries that have not yet realized they are small nations.’ Trade dispute settlement inside the EU provides protection of small member states and, thanks to Phelan’s publication, even British Brexit proponents should have known about it.