The Political Economy of Monetary Solidarity: Understanding the Euro Experiment 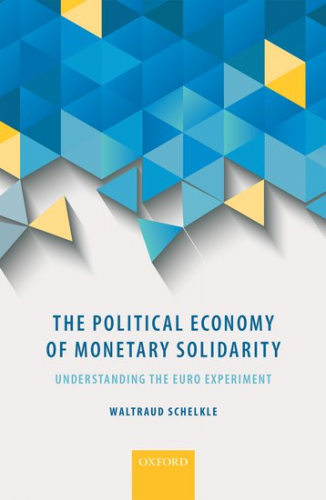 Europe’s Economic and Monetary Union (EMU) - and the causes and consequences of its prolonged economic crisis - has generated a small library of manuscripts and volumes over the past two decades, raising the question as to whether it is still possible to write a book with new and innovative insights on the topic. Waltraud Schelkle’s The Political Economy of Monetary Solidarity manages this difficult feat, by advancing an insurance-based account of Europe’s monetary union. Her approach counters current and previous conceptions about what makes a currency area “optimal”, such as optimal currency area (OCA) theory and more recent constructivist accounts (Matthijs and Blyth, 2015) as well as the literature on comparative capitalism (Hall, 2012; Hancké, 2013; Johnston, 2016; Iversen, Hope and Soskice, 2016). They all question whether a common monetary policy can adequately accommodate economic and political heterogeneity. Schelkle argues that economic diversity can make a currency union potentially more beneficial for its members because diversity provides greater gains from risk-pooling. A currency union enables diverse members to share risks more evenly, including (but not limited to) those from the common exchange rate, from inflation and financial instability. Schelkle outlines in detail how EMU’s risk-sharing mechanisms (most notably TARGET) shielded even its most crisis-hit peripheral member-states from sudden stops in the financing of trade during the height of the debt crisis.

At the same time, it is easy to see its failings amidst the current crisis. While diversity increases the economic benefits of risk sharing, Schelkle notes that it comes at a political cost – greater economic heterogeneity makes completing arrangements of risk sharing politically more difficult. This is due to the fact that diversity increases heterogeneity in member-states’ political preferences, which in turn can produce mistrust and misperceptions among member-states on risk-pooling. In this regard, EMU’s evolution is one where member-states exert the bare minimum amount of risk pooling required at any point in time. This creates a more pessimistic undertone to Schelkle’s theory, which she thoroughly details in Chapter 4 on the history of monetary solidarity in the United States: risk pooling institutions within monetary unions that can effectively stabilize economic and financial risks take a painstakingly long time to complete (in the case of the US, over 150 years), and can involve considerable political conflict in the process.

Conceptualizing EMU as an inherently sub-optimal risk sharing scheme rather than an optimal currency area is not only theoretically innovative in its own right. It also presents convenient policy recommendations. In contrast to OCA, Schelkle highlights that a fiscal union, and the potential for explosive politics that comes with creating it, is neither necessary nor sufficient for a monetary union to work effectively. Indeed, Schelkle provides convincing empirical evidence in her third chapter (pg 78) that automatic fiscal stabilizers in the US’s common federal budget have done less to absorb unemployment and income shocks than the decentralized fiscal stabilizers of Euro-Area member-states. Rather, current flaws in EMU would be best served by strengthening or creating risk sharing mechanisms (namely, a form of deposit insurance that could be financed by banks rather than tax-payers) that would need a fiscal backstop for the banking system only during times of great financial duress.

Schelkle’s insurance argument provides an innovative alternative to works that claim that diversity will bring doom to EMU. However, Schelkle’s theoretical argument rests upon assumptions that some within the literatures she criticizes would find problematic. Schelkle notes that risk within currency unions stems from several sources: there is the conventional bad luck and bad behavior, but above all financial risks that integration itself generates and also manifest disadvantage.

The latter (manifest disadvantage) is perhaps the most noticeable disagreement between her argument and prior literature, as she notes that there was “nothing deterministic” about which countries fell victim to the Euro-crisis. This assessment ignores two endogenous risk features about Europe’s great monetary project. First, EMU was structured in an ideal of a hard currency block – its entry requirements were predicated on countries upholding low inflation (and stable exchange rate) regimes, while the common currency’s elimination of a nominal exchange rate made real exchange rate “competitiveness” largely dependent on whether countries could deliver low inflation. While Schelkle notes that it would have been impossible to pre-determine the “unlucky” victims of the crisis, all five countries that relied on the European Stability Mechanism and its predecessors share one notable similarity in line with EMU’s low inflation bias: they all transition to the hard currency arrangement under the European Monetary System relatively late (from the late 1980s onwards), and hence lacked a robust history with national institutions that could deliver low inflation for a prolonged period of time.

Risk endogeneity within EMU also stems the fact that it exacerbated dangerous dependencies on credit-consumption in peripheral “debt accumulation regimes” that had limited access to cheap and plentiful credit before 1999 (due to their underdeveloped financial markets and high currency/inflation premiums). Schelkle is absolutely right when she criticizes comparative capitalist scholars (myself included) for neglecting the “true” financial catalyst of the Euro-crisis, a blind spot that is further reinforced by (trade-centric) comparative capitalism’s lack of attention to international capital flows more broadly. Yet she also largely ignores a new “third wave” of comparative capitalism research (Baccaro and Pontusson, 2016; Bohle and Greskovits, 2012), that has better incorporated finance into the study of capitalist regimes and has thoroughly documented how some countries have used credit expansion as a primary macroeconomic growth strategy (not only the Southern periphery and Ireland, but also the Baltic states). Unsurprisingly, international borrowing and debt-accumulation surged in these countries after they entered the Euro, leading to unsustainable growth in sectors that were dependent upon credit access (notably the real-estate and construction sectors). Schelkle does acknowledge that financial integration under the Euro led to greater financial risk (but not necessarily greater financial risk sharing), and unsustainable borrowing is a common theme of her country crisis narratives (pg 160-166). Yet she neglects domestic features governing credit access – or the fact that credit institutions and financial regulatory frameworks are quite heterogeneous across the Euro-zone – and fails to consider that countries whose leaders made credit expansion a central pillar of macroeconomic policy since the late 1970s were particularly prone to financial borrowing excesses once default and currency risk were marginalized after 1999.

Another limitation with Schelkle’s book is that it does not go as far as it could on the political realities of “completing” risk-sharing institutions within Europe’s monetary union. Schelkle’s account of the US’s long, painstaking experience in creating effective risk-pooling mechanisms provides a straightforward assessment of how arduous completing a currency union is. But little consideration is given to how much patience European states (particularly the “unlucky”) have in undergoing these growing pains for a protracted period of time. Uniting America’s regional tensions that failed to die after its bloody Civil War was a central tenant not of completing its currency union, but of solidifying its nation state. It would be quite ironic if the EU – an economic entity founded on the purpose of preserving peace in Europe – had to undergo similar political conflicts to complete its own monetary union.

More crucially, EMU is predicated on international law whose very existence rests upon the voluntary participation of states, in contrast to national currency areas. Though EMU is a unique monetary experiment, lacking long-term examples when projecting its political longevity, Schelkle’s argument would have been made stronger had she discussed whether the European Union is strong enough to withstand the kinds of conflicts that mature monetary unions are built upon. Similar discussions on the political feasibility of creating a European equivalent of the FDIC (Federal Deposit Insurance Corporation) are also lacking. A dissection of the optimal political conditions that assisted the EU in building a banking union (or wider discussions on the structural power of trans-national banks) could have provided helpful insights about the political dynamics that would be necessary for creating a supranational deposit insurance scheme (Culpepper and Reinke, 2014; Epstein and Rhodes, 2016).

In sum, Schelkle’s book is necessary reading on the economic benefits and political difficulties of creating a monetary union based on effective risk-pooling. By taking an insurance-based view, her discussions deviate from the grand policy designs suggested by OCA and constructivist disciples, and provide policy recommendations that are more feasible than proposals for completion of fiscal, or political, union.

Johnston, A. (2016). From Convergence to Crisis: Labor Markets and the Instability of the Euro. Cornell University Press.