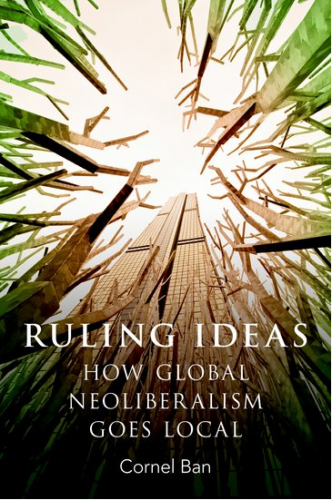 Cornel Ban’s impressive new book is simultaneously a meditation on how foreign neo-liberal ideas become anchored in a new society and also how those ideas and associated practices can change in that process. Ban highlights the convincing victory of neo-liberalism and then asks how its internal variations come about and whether these variations are meaningful for citizens. He concludes that the stakes are high since what he calls ‘embedded neo-liberalism’ is both more humane and, he suspects, ultimately more durable than ‘disembedded neo-liberalism.’ Spain is a case of the former, Romania ultimately a case of the latter, and Ban leaves little doubt about which version he admires more. Refreshingly, his account of embeddedness is not built exclusively (or even primarily) around the welfare state. Instead, he also stresses industrial policies, education, and taxation policy. The ‘hybrids’ that Ban describes are shaped by particular features of the social networks—primarily of economists and their allies in political parties—but also of exposure to international leverage and coercion.

Since several good summaries (and fair criticisms) of the book are already available, I wanted to focus my remarks on three ways the book moved forward important debates that seem orthogonal to the main argument. For the analytical skill of this book is such that novelty lies around every corner. The book does what I want of a good book, it sets me to thinking about what I thought I knew. Reading it made me conclude I didn’t know certain stories as well as I thought I did. And that’s because those stories of internalizing foreign practices and ideas have not been told quite like this before.

First, the book can be read as a powerful corrective to the diffusion literature. I should admit that the concept of ‘diffusion’ tells me almost nothing I want to know about institutional change. This biological metaphor privileges pattern recognition at the cost of near-blindness to adaptation and hybridity. Over the course of two books covering several countries and many policy domains, I’d developed a much more political notion of institutional emulation and imitation that relied on ‘minority traditions’ that ‘pulled in’ (and adapted) institutional innovations from outside the national society.

Ban’s book takes that kind of argument a major step forward, even though his references to the diffusion debate are relatively few (and mostly complimentary). He begins with a novel definition of neo-liberalism (focused around the primacy of credibility, openness and competition in market settings) that lets readers tell when core ideas are in play as all the hybridized embellishments and the Spanish and Romanian national peculiarities come and go. This definitional discipline, in turn, helps us see when and why certain actors like central banks and Ministries of Finance peel off of the Keynesian moment after 2008, defecting back to neo-liberal tenets as soon as fiscal sustainability/government credibility becomes a pressing issue. The book also offers an explanation of how older Spanish and Romanian national traditions and newer knowledge networks combine to explain whether or not neo-liberalism becomes embedded. And the book offers a clear story about what Ban calls ‘institutional cohesion’ that also helps explain when an ideational consensus can be expressed politically (as opposed to merely dominating professional economics circles in each country). To me, these virtues amount to yet another reason to be skeptical of diffusion theory’s implicit commitment to mechanical processes and to the idea that what spreads doesn’t change as it goes.

Once neo-liberal ideas and associated policy practices spread, the book then also asks, Who ‘edits’ these ideas, with what tools, and how radically? Here, again, I found the book stimulating. Ban’s two main national cases are of what one might call subordinate neo-liberalism in that they occur in states that generally do not enter the first rank of European powers (even though both are actually fairly large and Spain made a play before 2008 to become a first-tier European power).

Surprisingly to me, Ban’s concepts also help us look at superordinate states that mainly call the shots in Europe. Take, for example, the idea of eccentric editing and radicalizing the neo-liberal paradigm. I had fun thinking about Romania—Ban’s extreme case—in light of what’s been going on in Germany in recent years.

Consider the features Ban foregrounds, all present in Germany, too: The critical importance of the perceived failure of alternatives to neo-liberalism? Check. Keynesianism in Germany and neo-developmentalism in Romania have both been routed in the public debate. An echo chamber and ideational monoculture around political leadership? Check. The people around Merkel (including the SPD coalition partners) speak the same economic language, and the German press consensus is apologist to the core, resulting in a kind of ‘pop ordo-liberalism’ that has thoroughly conquered the minds of German voters. Editing changes economic terminology? Check. Major institutions like the Bundesbank and Council of Economic Advisors have essentially become complaint bureaus, specialized in playing down or undercutting critical views of German policy. Broadly, they do what I call ‘normalize and apologize’, in which any benefits flowing to Germany (e.g., low interest rates from the flight to safety) are held up as the normal benefits accruing any state that undertakes Germany’s structural reforms. Meanwhile, apologists point to purported German eccentricities (e.g., debt brakes, aging population, high-saving/low-investing businesses) when defending Germany’s purported inability to change things like a huge current account surplus. Germany is ‘normal’ when it prescribes for others, ‘eccentric’ when asked to reform.

Finally, Ban’s book led me to reflect more deeply on issues of co-evolution and even virulence. Isn’t our prejudice that the copy is always weaker than the original? Mine certainly is. And yet when a new set of practices such as those of neo-liberalism are transported to a new environment without the ideas (organism) that co-evolved along with it, the ‘new thing’ might have a real advantage. Should one then look at neo-liberalism as akin to an invasive species in which the right kind of competitors are simply lacking? Here, Spain’s alternative traditions seemed far more vibrant and enduring while Romania’s developmentalism faced an extinction event that left neo-liberalism alone and uncontested, with the result that the EU tried to slow down the extreme policies that resulted.

So much of diffusion theory presumes both a relatively stable model that moves and in an environment that itself is fairly fixed. But putting these three points together, one can distill from Ban’s work an alternative world of flux: 1) Under the radar, a whole lot of innovation is going on. 2) This innovation is also happening among the primary sponsors of neo-liberalism, who 3) find that the combination of globalization of capital and regionalization of their money has opened up possibilities that never existed before. In the past, whenever German trade got disruptive, European leaders would huddle and work out a way to deal with it, whether under fixed or flexible exchange rates. The common currency makes this impossible. Internal resistance to the ‘edited’ model has eroded badly, leaving external resistance as the only possibility for course correction. This has been inadequate so far, with the result that the Eurozone misery has lingered far longer than it might otherwise have. It’s the great benefit of Ban’s book that he gives us tools to make sense of this.