Globalization and Change in Higher Education: The Political Economy of Policy Reform in Europe 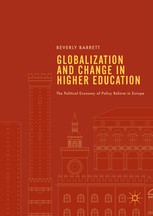 The Bologna Process was a crucial step in the internationalization of higher education in Europe. Launched in 1999 during the Sorbonne Conference in Paris, the ambitious  goal of the Bologna process is to promote a reform of higher education systems in Europe through the harmonization of degrees structures and course credit systems (the two tier training structure, with bachelor followed by doctorate). The Bologna process tries to facilitate the mobility of students across European countries and the recognition of their degrees; to increase the attractiveness of European universities and their quality; and, ultimately, to promote the creation of a European Higher Education Area (EHEA).  Based on the initiatives of national education ministers, the Bologna process is a peculiar intergovernmental process of voluntary convergence of higher education systems, involving also non-EU Member States as signatory countries and encompassing national, regional, and European responses to the pressures of globalization under the mantra of the “knowledge economy”. Therefore, this ongoing process is taking place at different speeds and according to the specific domestic political-economic context of the countries participating in it.

In her book, Beverly Barrett asks what explains the institutional change within the implementation of the Bologna Process. By drawing from insights of historical institutionalism, the main hypothesis of the book is that the political economy context matters as it facilitates or impedes convergence on the Bologna goals. The author argues that three political economy factors can explain Bologna reforms: firstly, the increasing competitive economic pressures of globalization; secondly, the role of domestic politics (intergovernmentalism); and, finally, sociological and ideational processes of norm setting through Europeanization. Combining these three types of explanations to understand the complex interdependency of economic, political, and social influences on higher education, the author examines the role of universities under their double hat of “recipients and “agents” of change in the framework of the Bologna process. On the one hand, since higher education institutions do not take part in the policy process at European level, they are recipients of change in that they are reformed to contribute to growth and competitiveness by creating (and attracting) a highly skilled labour force in order to fulfil  the Bologna goals. On the other, universities are agents of change in that they are seen as inherently increasing social cohesion as well as social and professional mobility, in alignment with the goals of the European Higher Education Area (p. 58). At this point, the analytics of the book seem to be a bit too aligned with the rhetoric of the Bologna process.

To illustrate her argument on determinants of the Bologna process at the national level Barrett compares its implementation in Portugal and Spain (ch’s 6-9). By focusing on these two Iberian countries, characterized by similar socio-economic characteristics, namely strong Latin culture, catholic traditions and the transition from authoritarian regimes to liberal democracies, the author tries to find out which factors determine differences in how the Bologna process unfolds: the national governance background, the political economy context, higher education governance, policy reform, and modernization of higher education institutions (p. 112). Additionally, two chapters are devoted to the analysis of the role of stakeholders in the two countries.

The empirical analysis offers a clear picture of the institutional changes that occurred in both countries. It points to the importance of factors such as the structure of government, consistency of political leadership, and the availability of funding measured by GDP per capita in influencing the process of higher education reforms and in explaining their speed. Whereas in Portugal, dubbed the “good student of Europe” (p. 111) by Jacques Delors,  the Bologna process was furthered by intergovernmentalism, with the core enabling conditions of a unitary government structure and a shared consensus on increasing access to education domestically and on attracting students internationally. The Spanish case is more complex given the presence of 17 autonomous communities, overlapping governance in higher education by regional and national authorities, turnover of government, and lack of funding. Hence, in contrast to Portugal, Bologna reforms  came through Europeanization, in that they originated at the supranational level, with the national role in the Bologna process resulting from a mix of “regionalism, domestic policy, and internationalization” (p. 163) . The message of the book is that domestic politics matter: “government structure, as well as political support and institutional leadership” are key to policy reforms (p. 27).

Rooted in the politics of education, a new and growing field of research (Busemeyer, 2015), the monograph by Beverly Barrett makes a significant contribution to the literature by investigating the Bologna process through the lens of political economy. However, the author could have given more room to the political contestations around the Bologna process. For example, very little is documented regarding the thorny implementation of the Bologna process in Spain, with a lot of resistance and criticism from students and academics (Garben 2011, p. 219). The empirical material, which explores key legislative documents, would have benefited from additional evidence available in the Agence Europe bulletins, which would have revealed the dynamic nature of implementing Bologna in the two countries, including the diverse preferences of key actors. The use of more data would have mitigated a major flaw of the book, notably very little consideration of alternative arguments. Combining the theoretical perspectives of intergovernmentalism and Europeanization sometimes leaves the reader with the impression of an argument that seeks to fit evidence to an all-encompassing theory.