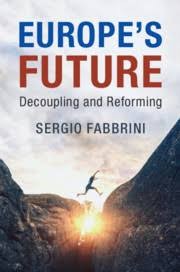 After a decade of multiple crises – including over eurozone debt, refugees, the rule of law, and Brexit – the European Union finds itself at another crossroads. EU leaders once again will have to decide which future path of integration to pursue. On the occasion of the 60th anniversary of the signing of the Treaty of Rome, in the spring of 2017, European Commission President Jean-Claude Juncker published a White Paper on the Future of Europe. It included five possible future scenarios: (1) carrying on, (2) nothing but the single market, (3) those who want more do more, (4) doing less more efficiently, and (5) doing much more together. While the third scenario – a Europe of ‘multiple speeds’ or a form of ‘differentiated integration’ – has received the most attention, it is much harder today for European elites to find consensus on Europe’s future than it was in the late 1980s or early 1990s.

In a superb new book, Sergio Fabbrini offers a potential way forward. He puts the blame for the EU’s overlapping crises of the past decade squarely on the rise of an ‘inter-governmental’ Europe that has been incapable of dealing with the crises’ root causes. Fabbrini argues that the crises triggered a new cleavage between what he calls “sovereignist” and “Europeanist” forces, which has led to a strengthening of decision-making autonomy for the member states. This dynamic is what German Chancellor Angela Merkel once referred to as the “Union Method.” Because of the electorally sensitive nature of the crises – over economic policy, security policy, or immigration policy – EU decision making has become heavily politicized in its member states. This has led to ever louder domestic calls to ‘take back control’ from Brussels. As traditional inter-governmentalist instincts returned, Fabbrini believes that this trend has led the EU to become much less effective in responding to those crises, which are all ‘systemic’ in nature.

The euro crisis would have been solved much quicker if its member states had supported the creation of a joint debt instrument (or ‘Eurobond’) and a banking union that included common deposit insurance. The migration crisis would have been easier to deal with if the EU was in charge of protecting its single market’s external borders. Other issues – be it how to tackle climate change or how to respond to terrorist threats – would also benefit from supra-national solutions. Fabbrini’s central argument is organized around separating the largely technical and economic governance of the single market from the political project of Europe. Rather than still dreaming of a “United States of Europe” that would see the current European Union evolve into a federal state, Fabbrini takes his inspiration from the early integration experience of the thirteen colonies in North America in the late 18th century, and proposes that the member states of the Eurozone venture on a path that will lead them towards a “federal union.”

As Fabbrini is one of the world’s leading scholars to have studied the evolution of European integration from a comparative (American) perspective, he is well placed to make his case. A “federal union,” he points out, was James Madison’s solution to the paradox of creating a republic out of many republics. On the one hand, the deliberate demotion of state sovereignty was a key component in rethinking the American union. On the other hand, new ideas were needed to come to terms with the tensions created by sovereign states in a sovereign union.

If the political project of Europe is going to succeed, Fabbrini submits, the current members of the Eurozone will have to start moving towards such a federal union, with proper subsidiarity between levels with member states keeping a considerable say over their own affairs. But the much-needed mechanisms of solidarity are only possible when they come with the democratic legitimation a federal union can provide. Nothing stops the euro-outs from remaining in the single market, in which the “four freedoms” – of goods, services, capital, and people – continue to provide the fundamental underpinnings, and over which a supranational EU Commission can preside in a technocratic fashion. But not all members, including in Scandinavia and Central Europe, should be forced to take part in the federal union they do not deem desirable from a national democratic point of view.

With characteristic wit and occasional rhetorical flourish, Fabbrini guides his reader towards a ‘constitutional decoupling’ to free the EU once and for all from what he calls “the tyranny of one-size-fits-all.” He admits that separating Europe’s economic project from its political project will make it smaller. But it will also be more united than the current EU. He foresees that his solution will make for a more balanced relationship between the European countries that are part of any federal union and those that choose not to take part, including the United Kingdom.

There is much to admire in Fabbrini’s Europe’s Future. His key contribution – to create a federal union of sovereign states – is both novel and imaginative, and is bound to stand the test of time. Fabbrini manages to compare the EU with the US in illuminating fashion as his knowledge of both unions is equally vast and detailed. Most of his predecessors have fallen short in their comparative exercise as they tend to grasp the intricacies of one but not the other.

I do, however, have one substantial disagreement with the book and one question Fabbrini leaves open at the end. On substance, one can quarrel with Fabbrini’s characterization of the EU’s multiple crises as stemming mostly from the EU’s inter-governmental character. One could make the counter-claim – indeed, many have – that both euro and migration crises have been first and foremost crises of the single market. By now, the standard view of the euro’s predicament is that it was a balance-of-payments crisis caused by unsustainable financial and capital flows, which lacked adequate supervision and resolution. The migration crisis was made worse by the single market’s sacred principle of freedom of movement. Fabbrini would undoubtedly retort that the solutions to the single market’s shortcomings are not to be found in Merkel’s “Union Method” but in proper supra-national fixes. And while he would not be wrong, the more of those fixes are put in the hands of technocrats, the harder it will be for the Commission to deny that they are indeed doing political, distributive, things.

Finally, a central question remains: why would Germany, the EU’s most powerful member state, agree to move towards a ‘federal union’ if they benefit so much from the current institutional status quo? The road from here to there remains full of political obstacles. But then, that was also the case during the early 1990s right before Maastricht. The key will be for today’s EU leaders to once again come together around a new consensus. They would do well to take inspiration from Professor Fabbrini’s excellent new book. Exactly how the EU could start a political process towards decoupling and reforming is perhaps the subject for his next book.