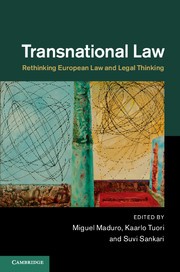 Looking at the title of this publication, students of international relations and political science may wonder at first what it is that invites rethinking. How is “transnational law” different from international law or its younger offspring -- which also keeps inviting existential questions -- supranational law? And why should they bother with lawyers’ thinking at all?

The book’s greatest merit consists in its conceptual clarity and the firm editorial hand, which guided its production. It makes the edited volume’s contribution much greater than a mere sum of its constitutive chapters. There can be disagreements among the authors regarding definitions and conceptual approach (even on the question of what exactly is to be understood by transnational law); these are, however, acknowledged and explained. The chapters frequently speak to each other and one gets a sense of how stimulating workshops, that preceded the book, were. Last but not least, many chapters in the volume present the key ideas developed by their authors in recently published books (Tuori’s European Constitutionalism, Patrick Glenn’s Cosmopolitan State or Alexander Somek’s Cosmopolitan Constitution).

The short introductory chapter presents individual contributions and also the key motivation of the book – the need to rethink the nation-state centred conceptual vocabulary of law. The chapter acknowledges that this conceptualisation cannot be simply abandoned, but needs reframing and reassessment to be useful in the present world. The volume then opens with a chapter by one of the editors (and the leading intellectual force behind the whole project). Kaarlo Tuori presents the key concepts of transnational law, introduces its most challenging controversies, and comes up with his own solutions, based on his original theory of critical legal positivism, which informs most of his work.

In order to understand how profound the changes of and in law have been in the last decades, Tuori firstly presents traditional divisions of law established in modern legal thinking of the 19th century: between public and private law, constitutional and administrative law, and perhaps most importantly, between national and international public law. The latter viewed national law as a “black box” – it did not interfere in domestic matters of sovereign states. These distinctions have been lost, Tuori argues, through privatisation of public administration and also the gradual opening of domestic legal orders to international and supranational cooperation. “Legal hybrids”, which escape neat categorization and doctrinal conceptualisation, emerged. Transnational law epitomizes, according to Tuori, what legal hybrids stand for. It is characterized by the loss of capacity of state law ‘to respond to regulatory needs when society undergoes denationalisation and when, as a consequence, the social space to be regulated is no longer identical with the political space of the state’ (p. 18). One way of putting this is to say that there is no politics in the transnational sphere, only administration of things.

Modern law has traditionally responded to the need for cross-border regulation by means of international law based on the cooperation among sovereign states; this is however no more viable due to the hybridisation described by Tuori. Conflicts arise without a coherent set of norms that would govern them. Tuori however refuses ‘radical pluralism’ of some public law theorists and searches for a ‘new global master principle’. Having criticized several alternatives, Tuori highlights ‘perspectivism’ of legal roles and disciplines. This perspectivism is not transcendental, as Kelsen had it, but is constituted by a situated experience of concrete legal actors – including legal scholars: hence the call for ‘rethinking’, which in fact means self-reflection.

The chapters that follow can be read as responses to Tuori’s call: the first part is conceptual: Patrick Glenn examines how binary thinking dominates legal thinking and how it could be enriched by the ‘multi-varied’ logic (allowing for more than two alternatives). Enzo Canizzaro and Beatrice Bonafè examine how judges seek to overcome the ‘solipsism’ of their legal orders by using a ‘margin of appreciation’ doctrine, interpretation consistent with the requirements of ‘the other’ legal order and equivalent protection. Alexander Somek’s is a tour de force through the history of Western constitutional thought culminating in what he sees as a new model of constitutional authority towards which he expresses a very ambivalent stance. Finally, Ralf Michaels looks at the links between legal pluralism and liberalism.

The second part focuses on justice and human rights in the transnational context: Joxerramon Bengoetxea examines legal and cultural pluralism, Samantha Besson focuses on human rights in Europe. Douglas-Scott presents a more critical approach, starting with the observation of the absence of justice in Europe. Christian Joerges bridges this part to the following by studying ‘justice under private international law’.

The third part looks at how transnationalisation affects the established fields of domestic (national) law: Hans W. Micklitz observes how the private/public law divide is disappearing from the private law perspective, while Giacinto della Cananea approaches the same problem from the point of view of public law.  Jan M. Smits looks at transformations within the field of private law and finally Oreste Pollicino and Marco Bassini study internet law.

In sum, the book presents the cutting-edge research in legal and constitutional theory, which is accessible to anyone interested in conceptual questions preoccupying legal scholars interested in law beyond the (nation) state. It is therefore highly recommended for both specialists in the discipline and for those who observe legal phenomena from outside.