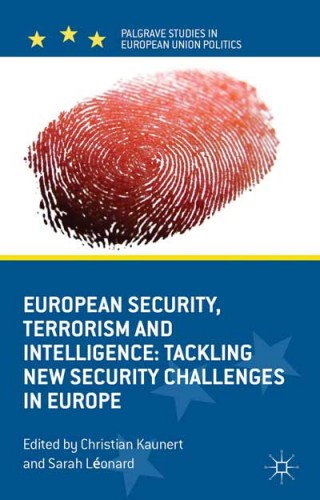 This book is a timely summary of developments in the domains of European counter-terrorism and internal security after the 9/11, and the Madrid and London terrorist attacks. It is not just another “global war on terrorism” book, but takes the more specific perspective of European security integration. It has a comparative focus on transnational and trans-Atlantic intelligence cooperation and an analytical focus on the EU as a prospective security union and international security actor. The editors underline that the global networks of terrorist cells have made intelligence gathering particularly challenging, strongly dependent on efficient international cooperation. Thus, the ‘comprehensiveness’ or integrated actorness of EU-level policing is not only an internal European issue but also of external concern. The book also highlights critically the issues of data protection and privacy this raises.

The book analyses in detail how the global context in which new security challenges emerge reflect societal, institutional and technology developments that bind countries together in closer ways than ever before, while simultaneously enabling the rapid proliferation of threats and cross-border crises. The various contributors try to answer the question whether the European Union as a security actor is well equipped to tackle complex security challenges within and beyond its borders. The answer is ´yes´ and ´no´ at the same time. On the one hand, the EU is under pressures and has potential for both widening and deepening its cooperation, but lacks, on the other, the political consensus about priorities and speed for further integration in this area. One of the central issues in the EU after the Lisbon Treaty is the need to overcome the obstacles of divergent national approaches as sources of relative inertia. The book illustrates that, since the abandonment of the former Pillars, the legal framework of the EU JHA/AFSJ has been further transformed, and cooperation advanced towards a supranational shift of competences. The EU legal instruments create a framework for the exchange of information, cooperation and joint operational actions between law enforcement authorities of the Member States. However, the implementation of the instruments is not sufficient so far. The evidence-based discussion about dilemmas and obstacles in national and supranational security cooperation – particularly on counter-terrorism and intelligence sharing – is a particularly strong feature of the book.

Several contributions deserve highlighting: there is, first of all, a valuable comparison between counterterrorism developments in the U.S. and the EU by John D. Occhipinti. Despite some evidence for federalization, the EU police cooperation system differs significantly from the US federal system of law enforcement given its legal constitution and allocation of competencies. The chapter by Oldrich Bures on Europol`s Chicken-Egg dilemma in its counter-terrorism role is another interesting attempt to analyze the maturing of the EU criminal intelligence agency, having to overcome its limited powers and the lack of trust by national authorities. If this fails, the EU counter-terrorism policy would continue to be just a ‘paper tiger’. From the other side, Claudia Hillebrand studies the struggle for sound parliamentary scrutiny of Europol. She demonstrates the increasing attention to ‘democratic control’ over European policing activities by both the European Parliament and national parliaments. This trend reflects the perceived rise of EU level policing and intelligence powers, at odds with the notion that it is just ‘a paper tiger’. The UK case of public-private security partnerships that recast the state`s monopoly of violence by Carlos Ortiz should be especially interesting for scholars studying the private security sector. The balance of power between the nation-states and industry shifted more in favor of the private sector; the author argues that appropriate private sector involvement can be quite an effective governance approach.

Most chapters contain good selections of case studies which provide a basis for further theoretical advancements to understand aspects of security integration in the EU. If something is missing, then it is a chapter aboutsecurity cooperation in tackling the problems of illegal immigration and smuggling of human beings. Cross-border human trafficking is not a new security phenomenon for the EU. The contemporary migration crisis will likely change the internal security and law enforcement system of the EU in the near future.

In sum, the book confirms that the EU has, in fact, a significant resource for ensuring internal security, which should be used in a more coordinated way based on mutual trust. Expected benefits are higher than possible risks of further steps towards security integration. The book is a valuable source for both experts and practitioners of transnational security cooperation.